Good news! Custom Toll Free is currently upgrading toll free number search to show even more vanity number results. Please fill out this form and let us provide a customized search for you!

In the wake of the holidays, 800 toll free numbers continue to remain relevant through the winter wonderland. Don’t think just because the shopping blitz is over that these numbers will go out of service. If anything, 2013 will prove not to be the end of an era, but a new beginning. On the surface it would seem that last year would have shown a decline in the use of 1-800 toll free services, but the medium is taking new strides for greater evolution. With even more 800 toll free numbers being taken off the wires, the popularity continues to grow. 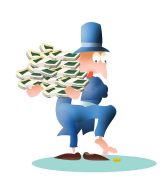 Politicians seem to have been able to strike a last minute deal to avert the fiscal cliff. So what does the new fiscal crisis bill mean for small businesses, America's position in the global economy, and business owners?

While the new deal which breaks the stalemate over the fiscal crisis may help some dodge some new taxes, the bill which reportedly includes over $600 billion in tax hikes and few spending cuts doesn't sound that different than simply falling off the cliff.